Jamie was born and raised in Miami, Florida where she spent many years as a competitive water skier and recreational runner, including several marathons. She has a BS in broadcast journalism from Syracuse University and has lived in a number states, including Virginia, Texas and Alaska, where her son was born. Jamie and her husband ultimately settled in Madison and had their daughter here. Eventually, Jamie took advantage of an opportunity to get back into the fitness industry and received her personal training certification through the American Council on Exercise.

Jamie’s been training people for 7 years and loves to make the gym and exercise in general, accessible for everyone. Her own mother, now in her 70’s, is STILL a runner and serves as an inspiration to Jamie daily. Through her mother’s example, Jamie is driven to help people stay healthy and strong enough to do WHATEVER they want to do for as many years as they can!  She deeply believes exercise is about more than just how your body looks. It’s about building confidence, feeling better and surprising yourself with what you can accomplish. Whatever your goals, you want to make the most of your time in the gym- you want to see results, and avoid injury!  You are never too old and it’s never too late to start! 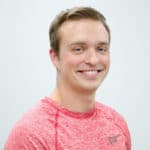